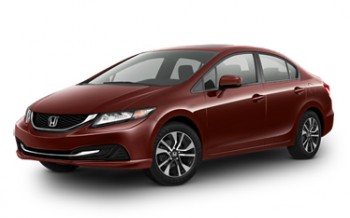 We are clearly pretty big fans of the Civic at Detroit Area Honda Dealers, and if you’re looking for a fuel-efficient small car that has an extra touch of tech sophistication, the 2015 Honda Civic EX does the trick. Walking the line between the base-level Civic LX and the top EX-L, this mid-range option goes up against its top rivals without fear, offering something for nearly any kind of driver.

Let’s take a look at what it can do for you.

From the start, Honda’s entry-level LX trim is pretty well-equipped, coming standard with amenities like Bluetooth HandsFreeLink for phone and audio, Honda’s i-MID infotainment system, a rearview camera with guidelines, and much more. Stepping things up to the 2015 Honda Civic EX adds on even more features, such as:

One of the best ways to see how remarkable the features of the Civic are is to compare it to some of its competition. The basic 2015 Corolla and Honda Civic, when placed side-by-side, make it clear why so many drivers have been choosing Honda’s small car for decades.

The 2015 Honda Civic features a 1.4L four-cylinder powertrain in addition to all of its excellent features; Honda’s engine has 143 hp and 129 lb-ft of torque. These specs put the Civic above the Corolla’s 132 hp and 128 lb-ft of torque, but that’s just the start of it.

The 2015 Civic with CVT is rated at an EPA-estimated 39 highway and 30 city mpg,* and when you see the Corolla’s 37 highway and 29 city mpg, the Civic’s superiority becomes even more obvious.

If you want to see the differences between the 2015 Honda Civic EX and the 2015 Toyota Corolla, we would love to show you. Visit a Detroit Area Honda Dealer near you today to take a test drive of the new Civic and find out if the mid-range trim is just right or if you should move up or down a notch. Don’t forget that the Civic is available in both coupe and sedan builds as well!

*Based on 2015 EPA mileage ratings. Use for comparison purposes only. Your mileage will vary depending on how you drive and maintain your vehicle.