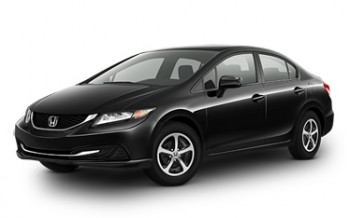 The 2015 Honda Civic is one of our most popular vehicles here at Detroit Area Honda Dealers, particularly for its fuel economy, and we think that when you compare it side-by-side against the 2015 Chevy Cruze—especially for mpg—you’ll see that the Civic comes out ahead. Let’s take a look.

It’s Tough to Beat a Civic

The 2015 Honda Civic Sedan with CVT earns an EPA-estimated highway fuel economy of 39 mpg and a city fuel economy of 30 mpg.* The Cruze, on the other hand, only manages 38 highway mpg and 26 city mpg; despite lacking in fuel economy, the Cruze comes up short on power as well with 138 hp to the 143 hp of the Civic.

Of course, the efficiency of a small car isn’t the only part that matters. The 2015 Honda Civic comes with some of the best features in the auto world as standard amenities. All of this comes standard on the 2015 Civic on its base-level LX trim:

There are comparable features on the Cruze—some of them even come standard—but to put it on par with the entry-level Civic LX Sedan would require it to be upgraded beyond the Cruze’s entry-level trim. Honda gives their drivers the latest in amenities without needing to upgrade.

Honda has been doing their best to make the Civic one of the smartest choices on the market for years, and it continues to do so, even when compared against popular competition like the Cruze.

Do you want to see if the Civic stands up to its reputation, if it really manages to take on the 2015 Chevy Cruze in mpg, features, and more? Then you should visit a Detroit Area Honda Dealer today and let us put you behind the wheel for a test drive. Don’t be surprised if you fall for the Civic by the time you need to hand the keys back, though.