How Does the 2015 Toyota Highlander Interior Compare? 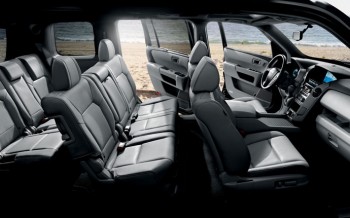 The 2015 Toyota Highlander interior has improved in recent years, but when you compare it to other options the Metro Detroit area has available—including the 2015 Honda Pilot—we think that the updates aren’t quite so impressive. Keep reading to see how the Highlander and Pilot compare to each other.

Not only does the 2015 Pilot’s interior feature modern soft touch materials to add another level of elegance, it also has more space than the Highlander:

One of the things you’ll notice almost immediately in the Pilot is that its third row of seating is much more spacious than the majority of three-row SUVs, including the Highlander. The 2015 Pilot has more head, hip, and leg room in the third row than the 2015 Highlander, making it suitable for smaller members of the family and adults.

Each new Honda model comes with the latest in standard amenities without requiring any upgrades; that means that the entry-level Pilot LX comes with features you won’t find on other vehicles without upgrading. You can find all of the following on each Pilot standard:

We encourage you to check out our full comparison between the 2015 Toyota Highlander and Honda Pilot so that you can see how they stack up side-by-side. You’ll find that you can have many comparable features on the Highlander, but Toyota requires you to upgrade for features Honda believes you should always have access to.

Once you get behind the wheel, we think you’ll see that the 2015 Pilot’s cabin has more to it than the 2015 Toyota Highlander interior. Visit a Detroit Area Honda Dealer today to schedule a test drive of the new Pilot; we’ll help you find out which of its five trim levels is right for you.