Find Extra Power in the 2015 Honda Accord V6

While the 2015 Honda Accord is already one of our most popular models in the Metro Detroit area, if you’re the kind of driver that likes your mid-size sedan to have an 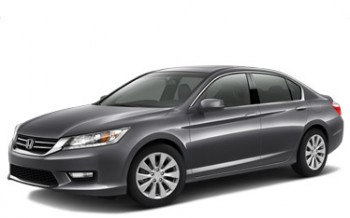 extra kick, consider the EX-L V6 or Touring trim levels. Both of these trims have traded in the four-cylinder of the basic model for a 3.5L V6, and while you’ll barely notice the difference in fuel economy, we think you’ll be blown away by the increased performance.

Under the hood of each of these V6 Accord models is a 278-hp 3.5L SOHC i-VTEC V6 engine that is capable of 252 lb-ft of torque. By taking advantage of Variable Cylinder Management and switching off as many as three cylinders while cruising, the engine is able to have one of the best fuel economies of its kind without sacrificing the performance you need.

While many drivers choose the standard Accord for its efficiency, the 2015 Accord EX-L V6 and Touring models earn an EPA-estimated highway fuel economy of 34 mpg,* which is a very small price to pay for a very large return on horsepower and torque.

More Than an Engine

When you drive an upgraded Accord, you get more than just the high-end engine. Both the EX-L V6 and Touring trims have some of the best automotive features on the road, including:

Honda even has a satellite-linked navigation system with voice commands available, letting you have high-power, high-class, and high-tech all in one sedan.

While you should always test drive a car before buying it, that goes doubly so for one you’re choosing in part because of its engine. The 2015 Honda Accord V6 models are a joy to drive, and we’d love to show them to you. Visit a Detroit Area Honda Dealer near you and let us put you behind the wheel of a high-powered Accord.