If you thought the standard 2015 Civic was a fuel-efficient choice for Metro Detroit drivers, we have news for you: the 2015 Honda Civic Hybrid is more fuel-efficient than the standard sedan. You could probably already guess that by the “hybrid” part of its name, but we think you’ll be impressed by everything the new 2015 Civic 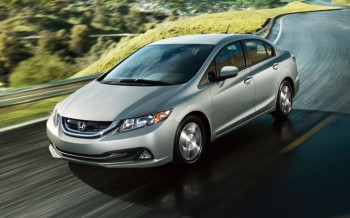 Hybrid can offer beyond its amazing fuel economy. Let’s take a look.

Drivers looking for a fuel-efficient small car in Detroit, that may very well have made the decision for you, but there’s so much more to the Civic Hybrid, including a package of great features and upgrade options.

Honda’s Civic has always had a reputation for efficiency and affordability, but in recent years it has also taken on a standard features package unlike other vehicles in its class. They have started setting a new standard for “standard features,” and other automakers still struggle to keep up:

And then there are upgrade options, including a leather package that adds on leather upholstery, heated seating, and a navigation package with satellite-linked navigation system and a multi-angle rearview camera.

The 2015 Honda Civic Hybrid is just one of the green Civic options we have at Detroit Area Honda Dealers. Visit one of our locations near you for a test drive, and don’t forget about the Civic Natural Gas and the Civic HF for other green choices! We’re sure that there’s a 2015 Civic here that fits your needs.

*Based on 2015 EPA mileage ratings. Use for comparison purposes only. Your mileage will vary depending on driving conditions, how you drive and maintain your vehicle, battery-pack age/condition and other factors.