The coupe version of the 2015 Honda Civic presents a smart choice for drivers seeking a small car with a sporty style, but what if you want high-power and sport-tuned handling as well? The 2015 Honda Civic Si Coupe is available now at Detroit Area Honda Dealers and raises Honda’s famous small car up to a whole new level. 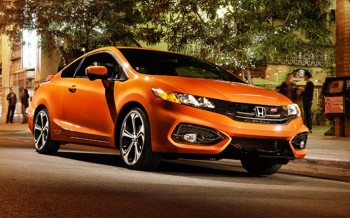 Let’s see how it compares to the standard Civic Coupe.

Upgrades to the Civic Si

Perhaps the first thing you’ll notice about the 2015 Civic Si Coupe is that it carries a sportier, more aerodynamic build than the standard Civic Coupe. The standard decklid spoiler, black honeycomb mesh grille, exterior chrome accents, and  18-inch alloy wheels all make the Civic Si as remarkable to look at as it is to drive.

And under the hood of the Civic Si Coupe is a 2.4L four-cylinder engine capable of 205 hp and 174 lb-ft of torque, and yet despite the power upgrade, the Civic Si remains one of the most fuel efficient vehicles of its kind with an EPA-estimated 31 highway mpg.* That’s a pretty significant upgrade in power from the 143-hp 1.8L four-cylinder of the standard Civic Coupe.

Honda has added on interior design elements that give the Civic Si a race-ready feel as well, with a two-tone red and black interior, textured aluminum pedals, a sequential rev-limit indicator, and more.

Of course, the power and style only go so far if you don’t have a car that’s built to take advantage of that engine, and Honda’s sport-tuned suspension with helical limited slip differential and six-speed manual transmission give you a level of control over the Civic Si that makes it feel as though you and this coupe are one and the same.

The Civic Coupe is a good choice for quite a few Metro Detroit drivers, but if you want something a little more powerful, a little more fun, the 2015 Honda Civic Si Coupe is for you.

Vehicles like the 2015 Honda Civic Si Coupe practically demand to be driven, and we want to put you behind the wheel for a test drive. Visit a Detroit Area Honda Dealer soon and experience what the sport-tuned Civic Si is capable of firsthand; we think you’ll love it.