Looking for News on the 2015 Honda Accord Plug-in?

If you were looking for anything new on the 2015 Honda Accord Plug-in model, we sadly have no news for you, but that doesn’t make the 2014 Accord Plug-in any less impressive at what it does. Able to drive short distances on electric power only, this special Accord helps bridge the gap between the already efficient hybrid and the 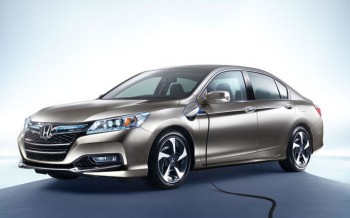 We think that you can probably tell the main difference between the standard Accord Hybrid and the Accord Plug-in by the name, but just in case: you can charge the Accord Plug-in’s batteries to get a boost in fuel efficiency in addition to its normal hybrid performance.

Choosing Your Accord Plug-in

While the standard 2015 Accord has its fair share of options and upgrades available, most of what you’ll find on the 2014 Accord Plug-in is set in stone. There’s one trim level, priced starting at $39,780 (MSRP),* and the only choice you’ll have to make is which color you’d like it in: Burnished Silver Metallic, Crystal Black Pearl, or White Orchid Pearl.

Of course, just because the Accord Plug-in is shy on choices doesn’t mean it’s shy on features. You can find the following amenities on every model:

The Accord Plug-in even features unique upholstery made from biofabric to go with its green powertrain. And about that powertrain: the 2014 Honda Accord Plug-in earns an EPA-estimated 124 city/105 highway/115 combined MPGe rating on electric driving and when switching to gas driving has 47 city mpg and 46 highway mpg.**

Like we said, it’s a shame that we don’t know more about a potential 2015 model, but it looks like the 2014 Accord Plug-in is more than ready to get the job done for another model year.

If you’re curious about the 2014 Honda Accord Plug-in Hybrid, we invite you to visit a Detroit Area Honda Dealer to learn more. Don’t forget that the 2015 Accord can be found in sedan, coupe, and hybrid builds as well, giving you four different Accords to choose from. It’s variety like this that makes us confident that there’s a Honda for nearly any kind of driver.